The satellite direct TV gets you through to numerous entertainment television channels to watch free and enjoy your time.

You will however, need the guidelines to know the setup along with the menu operation of your satellite television system.

Through the satellite direct television signals you get as many domestic and international television channels as you want without paying any cent. So, why pay for such entertainment?

You don't have to, unless you are obliged by your house, or department rental contracts to pay for this entertainment, although you have paid for the equipments, the tax and maybe the license to use television and the workers who installed them.

In the old golden days, buyers people, or consumers didn't pay tax, or for license to use televisions and radios. Sellers pay the tax, as they own the business

Nowadays consumers pay license even for smartphones and other devices, because the economical policies of such states that implement such methods is built up towards capitalism.

So, middle-class and poor people together have little chances to live the pleasure of the modern ages, if they really have any chances to survive the capital policies of their lands, in the first place.

Anyway, this is another topic, which is economical and political. This page is not.

All of the pages are well written to help you avoid commercial satellite television and use the satellite TV installation instructions to capture channels and after that know the streaming satellite TV process to watch satellite TV.

There are of course many television programs provided through computers with an internet connection. You don't need a satellite dish and a satellite receiver in this case. But, there are some questions here.

I am not going to answer these questions on this page, as they are off topic. So, depend on your instinct, while doing a search for "watch free television channels + computer + television". Study the results of such search and discover your instinct. 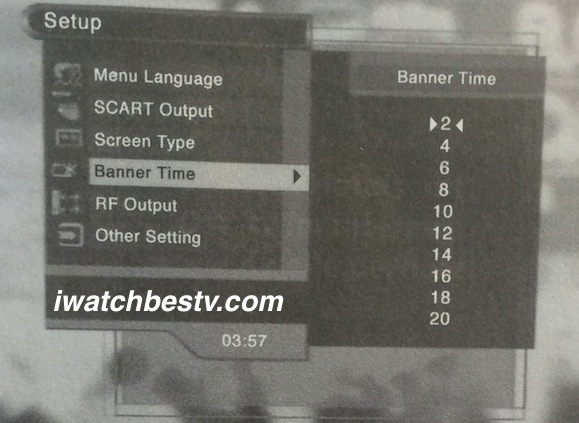 The Banner Time and the RF Output of Satellite Direct TV!

You will see the Banner Time of your satellite direct TV highlighted when you select it from the setup window to drop down in the right window the time range.

Through the Banner Time, you can setup the display period of information window on the screen, where the time ranges between 2-20 seconds. 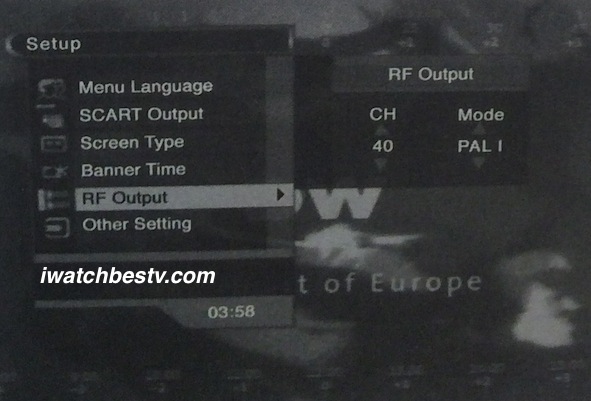 The RF Output will also be highlighted, when you select it from the setup window to drop down in the right window the RF Output for CH Mode and 40 PAL 1. At the channel mode you have The UHF channel: 21 CH - 69 CH and the UHF mode: Pal 1, PAL DK, SECAM L, NTSC M, or PAL BG.

To configure this, select the UHF channel and the UHF mode. Note that the factory preset has a value and that value is Channel 40. 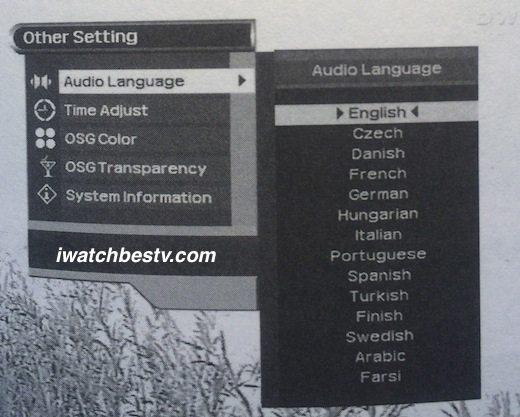 When you select the Audio Language on the Other Setting window, it will appear highlighted to drop the 14 languages for audio on the right window.

The audio language is the same as the main menu language you read before. It also includes Arabic, Czech, Danish, English (at the top), Farsi, French, Finnish, German, Hungarian, Italian, Portuguese, Spanish, Swedish and Turkish. So, select your language from the right display on this screen.

The Time Adjust will be highlighted, when you select it from the Other Setting window to drop a smaller window at the right that contains the GMT time by hours and date. Adjust the differences from the GMT according to your location to setup your local time.

The GMT, which stands for Greenwich Mean Time was the international civil time standard. The worldwide time zones are more than 40 and they are divided into Central Time, Eastern Time, European Time, Mountain Time, Pacific Time, Western Time etc…

When you select the OSG Color from the Other Setting window, it will appear highlighted to drop a small window at the right with the variables Cyber, Wood, Marine and Evergreen. So, you will use this menu to adjust the OSG Color.

The OSG Transparency is just below it in the main Other Setting window. When you select it a small window will appear at the right with percentage of transparency from 0, 20, 40, 60, 80.

When you select the System Information from the Other Setting it will drop a small window at the right with the Model Name, S/W Version, H/W Version and Company Name.

Carrying on with the satellite TV programming instructions, you have some other pages to consider the insights to install and operate good satellite direct TV. So, continue at COMING SOON.

How to say thank you?

Write about your satellite dish experiences, or about any of the movies, programs, series and shows you watch to get some useful gifts for doing this. You can upload pictures too.

Read satellite direct TV with one of your services, such as Google, Yahoo, or the others. Use the relevant small button from the top left, or at the bottom.

Pin one of the pictures on satellite direct TV.

In addition to the instructions of installing satellite TV you read on satellite direct TV and the other given pages, you may also be interested in the set of information on the following pages at tvcinemaapp.com: